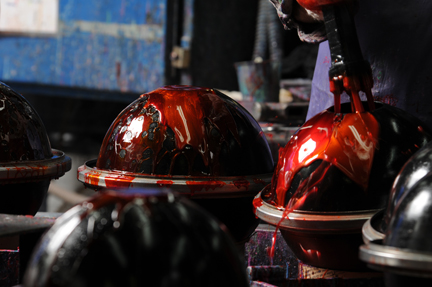 Knowing whether you need a symmetrical ball or an asymmetrical ball for the next piece of your arsenal is more important than you may think. Understanding the difference between the two can be a daunting task even for the seasoned professional, but once you have familiarized yourself with the main factors engineered into the ball construction process the sport becomes much clearer and adjustments become easier. Please keep in mind, however, that the information which follows may lead you to your nearest bottle of aspirin! It can be quite technical in nature, so don’t be alarmed if you need to re-read this article a few times before it starts to make sense.

The term differential is the common nomenclature for the difference between the maximum and minimum RG values. The larger the number, the greater the flare potential becomes for the bowling ball.

The radius of gyration, or RG as commonly known, is a measurement in inches from the axis of rotation at which the total mass of a body might be concentrated without changing its moment of inertia. Low RG balls rev up faster and more easily, creating more ball motion, or change of direction.

Total differential (flare potential) can be described as the difference between the X (low RG) and Y (high RG) axes of any bowling ball, symmetrical or asymmetrical.

There’s a Time and Place

Bowlers who favor the use of an asymmetric core need a little extra help curving the ball. These balls rev up fast and finish strong with a more aggressive movement downlane. Asymmetrical balls are great for heavy amounts of oil or longer patterns which don’t provide a lot of friction while symmetrical balls are typically smoother and yield a benchmark type of reaction that are more controllable. Symmetricals have two principal moments of inertia (X and Y axes) and asymmetricals have three (X, Y, and Z.) This greater degree of asymmetry is responsible for the highly dynamic moves asymmetrical balls can create.

And finally, don’t forget that there has to be a proper marriage between cover, core, and layout for the ball to react optimally, but we will save that for a later discussion.

15 thoughts on “Symmetric vs Asymmetric Cores”