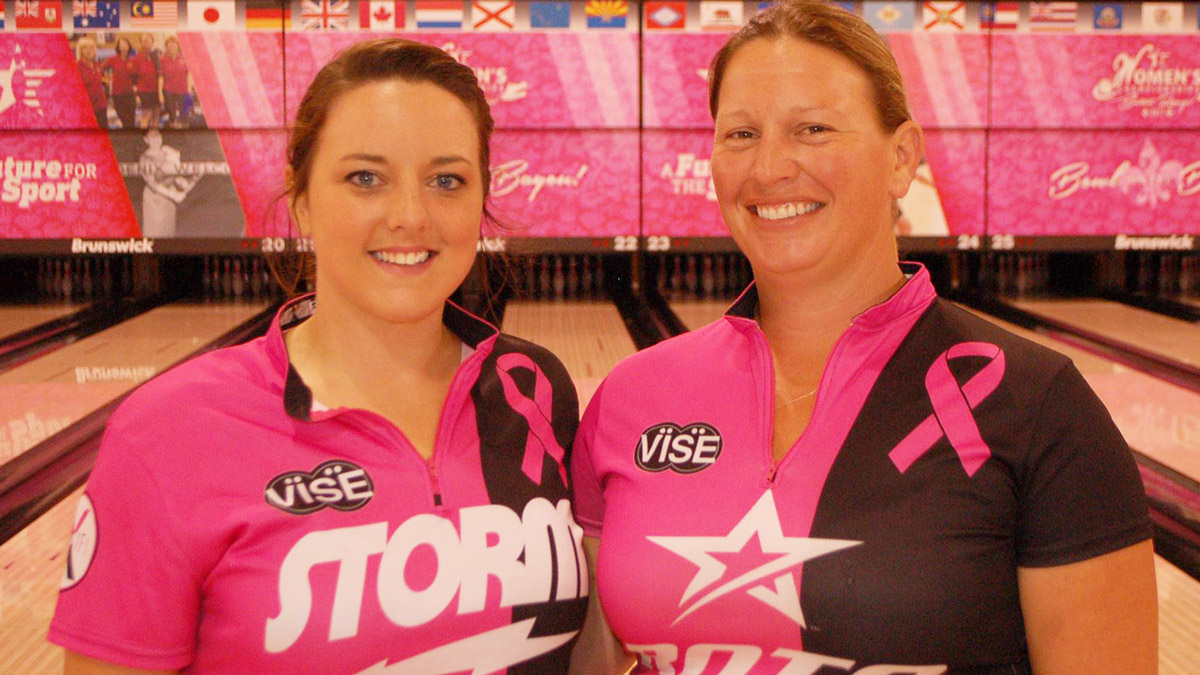 Charly Boelter and Samantha Kelly have bowled with each other twice and have taken home 1st and 2nd place at the USBC Women’s Championship in the Diamond Doubles. In 2017, Charly rolled games of 258, 245 and 203 for a 706 series combined with Samantha’s games of 257, 217 and 224 for a 698 set to take over the lead. Their lead held until the end of the tournament. Both Charly and Samantha threw Storm and Roto Grip bowling balls to earn this title. We had a chance to catch up with the Diamond winners and ask them some questions about the event.

When did you start bowling?

Charly: I have been bowling for 31 years.

Samantha: I started bowling when I was 3 years old at Hoffman Lanes in Hoffman Estate, IL. My father was the GM of the bowling alley, and my mother was a bartender/ junior coordinator youth program.

How long have you been bowling together at the USBC Women’s Championships?

Charly: 2 years…last year by accident, really.  I’d rather call it a blessing.

Did you practice together prior to going out to compete?

Samantha: We did not practice together prior, just bowled some local tournament together.

Did you know the score you had to shoot prior to bowling?

Charly: Yes, we looked at the score.  We both looked at it and said it was attainable, and let’s give it a shot.

Tell us about that day:

Charly: We had high aspirations on winning this tournament based on last year’s performance. The day started with our pre-tournament routines, which are somewhat similar…which makes it even easier to compete with her.  We took our time to get ready, prepared, focused, and revisit our plan of attack. We have an amazing relationship for two individuals that don’t know each other very well, and we just understand each other on the lanes, and are able to communicate with each other freely and constructively; like we’ve known each other, and our games for that matter, for years.  We came up with a plan and stuck to it the next afternoon.

Samantha: We both struggled in team, and stayed up late into the morning just talking about a game plan for the next day. That morning of the doubles and singles we got to the alley early, and both sanded a ball to 500 grit to create some hook right for us. It ended up working out in our favor. Yes we did know the score going into the tournament, but we also knew we were capable of shooting a good number just needed the pins to fall our way when we executed good shots.

What bowling ball(s) did you use during the event?

Charly: Haywire then switched to the IQ tour (glad I drilled up some new stuff…lol)

What did you ladies do after you finished bowling to celebrate?

Samantha: Actually, we got on the road right after the tournament due to work obligations. We are planning to celebrate with our sponsor, Motion Plus Lanes in the upcoming weeks. It is an exciting moment we want to share with friends and family.

You set your scores pretty late in the tournament? What was the anticipation like waiting for the event to conclude?

Charly: I’m glad it was so late’ it was the longest week ever.  I kept my fingers crossed, hoping and praying it would hold

Do you have a favorite Storm bowling ball of all time?

What advice would you give someone who’s going to bowl the Women’s Championships next year?

Samantha: Talk to the team, and have a game plan going into the tournament. Winning as a team everyone has to play as a team. I believe everyone needs to be on the same page as the breakpoint just may need to get to that breakpoint in many different angles.

Charly: Sam is the most amazing teammate anyone could ask for.  I am completely blessed to have fallen in her path. I would rather share the excitement (of a win) than have it myself.