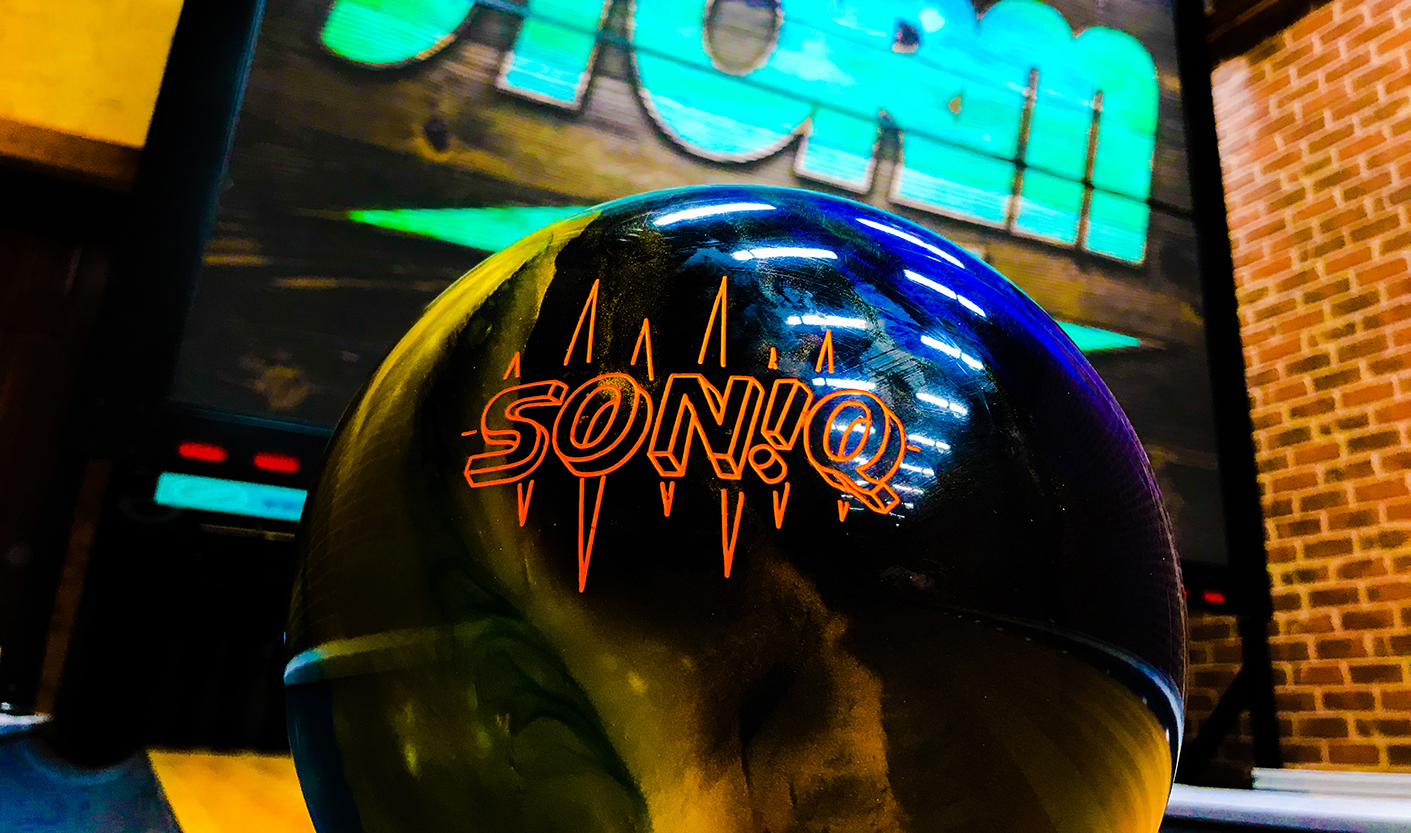 Since its inception, the evolution of the design can be traced across the Centripetal Low Flare Core, C3 Centripetal Control Core, and now the Centripetal HD Core. At first glance the Centripetal HD Core may look familiar, but deep down is where the magic truly happens. It is the densest core of any symmetrical Storm ball to date producing an RG value of 2.47. Historically, these renditions of the Centripetal shape have all exhibited a lower RG value with varying degrees of differential achieved by the manipulation of the densities in the core material itself. The Centripetal HD (high density) is the heaviest to date which makes the Son!Q much more center-heavy.  The Marvel Pearl retains the primary shape, but is constructed with a material of lower specific gravity.  What does this mean to you? Let’s explore…

We know that controlling the midlane is what the pros are renowned for. They are able to see ball motion in a way that lets them make the best decision in order to get their ball into a roll before the end of the pattern. Whether they do that with surface, speed, axis tilt, or core technology is dependent on the situation at hand, but believe me when I say having a ball in your hand that is trying to roll as soon as it hits the lanes certainly doesn’t hurt. Chris Barnes, who’s arguably the best technician on tour, told me years ago that he only uses low RG balls for this very reason.

A ball that is rolling into the pins carries considerably better than a ball that is hooking into the pins. When a ball makes impact and doesn’t have a direction of motion that is in-line with the centers of gravity of the pins, some of the energy that would have been available for the post-collision pin velocity will be lost to rotation and friction. Because the Centripetal HD Core’s center of gravity is extremely low, it consistently impacts the pins at the perfect spot every time maximizing carry.

Delving a little deeper into the physics behind it, angular momentum is much harder for an external force to change its direction as opposed to linear momentum. Angular momentum is essentially the rotational equivalent of linear momentum and remains constant unless acted upon by an external torque that’s proportional to the initial moment of inertia (the bowler’s release). The faster the angular momentum created, the more torque is required to cause a change in angular acceleration. Simply stated, we apply rotational energy to create angular momentum around the weight block of a bowling ball, AKA torque. This energy we impart on the ball stays the same until something else tries to stop it, like the friction on a lane or 40lbs worth of bowling pins. Cores like the Centripetal HD in the Son!Q that have lower RG values have a higher potential to conserve its angular momentum throughout the lane and into the pins. This results in less deflection, better carry, and higher scores.

Getting into something that’s a tad more observable to the naked eye, the entry angle into the pocket that the Son!Q creates really wasn’t that steep. Especially when compared to something like a Hy-Road Pearl that’s at the other end of the spectrum when discussing RG values. Balls like the Hy-Road Pearl, at least for me and the way I roll it, really magnify both wet and dry circumstances which is probably why they only time I use the ball is when there is at least 2000-4000 surface on it. With the Son!Q, I noticed less wrapped 10-pin leaves, fewer stone-9’s, and much lower flight paths of the pins when the ball makes contact – which was optimal for carry in my many off-pocket hits because the pins are colliding with each other instead of flying above one another. On the rare occasion I left a stone-9, there was always a messenger there to greet it.

For this test, I tossed 30 shots with each ball on a fresh Beaten Path pattern and took excerpts from each transition you can see below in the SPECTO results. Even just a 0.010 difference in the low RG versus the Marvel Pearl was enough to make the Son!Q breakpoint distance a couple feet sooner during my initial warm-up when getting lined up. But for this test, I wanted to show the best line to the pocket for both balls on the Beaten Path pattern by Kegel. Early on (fig.1), the Son!Q’s lay-down had to be about 3 boards inside of the Marvel Pearl. From slightly inside, the breakpoint distance was 1-2 feet later for the Son!Q, but it was also crossing more boards overall given the same speed and hand position I was using.

As the lane started to transition (after about 12 shots) I moved the standard 2:1 and found no shortage of movement or carry with either ball. The Son!Q laydown remained just inside of the Marvel Pearl with the breakpoints inching closer to one another downlane (fig. 2). The R2S cover on the Son!Q was able to generate slightly more entry angle into the pocket due to its cleaner nature when compared to the R2X featured on the Marvel Pearl.

After another 12 shots or so I moved another 2 left but kept my eyes the same. At this point, the breakpoint distance for both balls were well-nigh similar and the breakpoint boards were pretty close as well (fig. 3).

The differences in the two balls, for me, shined through on the fresh. When the lane started to really break down, the spread between the two got closer with the additional friction that was happening in the fronts. If you already have a Marvel Pearl but are considering picking up a Son!Q, I would recommend another one of your favorite layouts or a simple surface change just to give yourself a little more diversity in your bag – unless a 3-5 board shift inside and a slightly more angular downlane transition is what you are looking for given equal layouts/surfaces. To date, the original Marvel Pearl @ 3000-grit Abralon was my favorite “on the fresh” ball. Now that the Son!Q has made its way into my hands, I will keep it at the original 1500-grit polished surface and use it to fill that transition gap I’ve been combating for such a long time and reintroduce my Marvel Pearl back to 3000-grit.

With the same layout and the same surface for 30 shots the Son!Q, on average, when compared to the Marvel Pearl produced:

Storm has a full-time tech representative ready to answer any questions you have about the Son!Q or any other Storm product. Please call (800) 369-4402 (Mon-Fri, 8am-5pm MST) or send an email to tech@stormbowling.com (anytime).