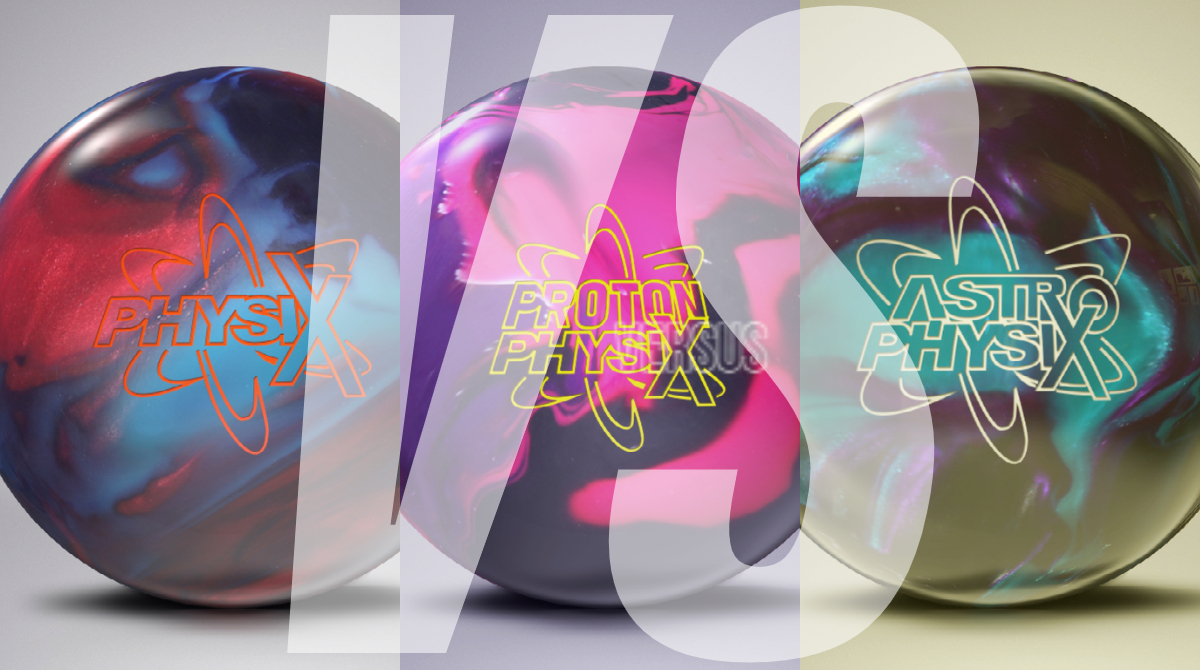 For this test, I drilled one of each of the balls in question and used the same 4.5 x 4.5 x 2 layout across the board. It’s logical to claim they’re going to roll different, but we want to find out just how different.

I tested these balls in three different oil pattern scenarios with the thought in mind that each one would play to a particular strength of each ball. For this test, I will find the optimal line to demonstrate where I would have to play with each ball on each pattern.

Storm is in an interesting position right now. It’s producing relevant and useful bowling balls that all serve a purpose. So how does the company continue to advance the frontier of bowling ball science? Easy: always be at the drawing board. If you’re not at the drawing board, you’re not in the game. You’re something else. By standing at the edge of what is known and unknown, you can create a tried and tested quiver of covers and cores at your disposal. One thing Storm has been particularly good at over the years is evoking memories of previous balls with new releases, which will tug on the heartstrings of bowlers as they fondly remember the gear that they have used over the years.

The Proton PhysiX isn’t only the third representation of the Atomic Core, it comes from a wholly different classification of coverstocks different from its predecessors: the PhysiX and AstroPhysiX. If there wasn’t enough contrast between R2S Pearl and NRG Hybrid on the PhysiX and AstroPhysiX respectfully, throw NeX Solid into the crucible and you pretty much have yourself a full 3-ball arsenal.

As many of you probably know all too well, R2S (particularly in its pearlized form) is the cleanest, most responsive (to friction) coverstock development of this century. NRG itself has been around for nearly ten years and still performs as admirably today as it did a decade ago. When we were first deliberating amongst ourselves which cover to put on the now iconic Atomic Core, the two most noteworthy formulas of our generation were the obvious choices. In typical Storm progression a pearl, solid, and hybrid version of most core types gets introduced worldwide. But rarely, if ever, do we see three balls as diverse as the Proton PhysiX, AstroPhysiX, and PhysiX in such a short timeframe all thanks to their own contrasting chemical elements. 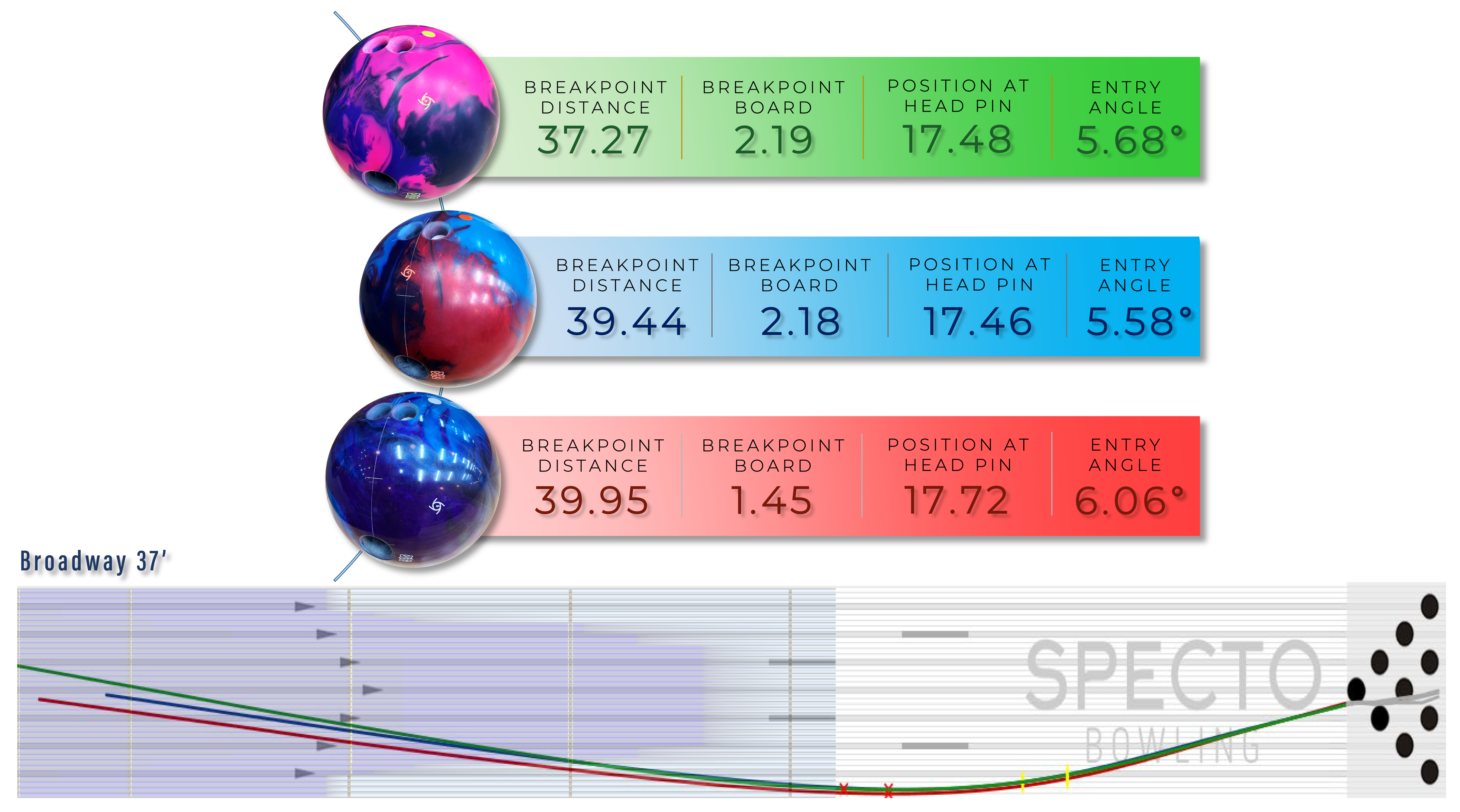 On a condition I would typically use urethane, you can bet that anything will hook on this 37′ 4.09:1 pattern. The trick is controlling the ball and the pocket, which is why urethane is a vital resource for anything shorter than 40′, depending on lane surface and player style, of course. I did not alter any of the balls’ surfaces so the Proton PhysiX stayed at 2000-grit, the PhysiX at 3000-grit, and the AstroPhysiX remained polished. Naturally, the AstroPhysiX played the furthest right with the most entry angle. The Proton naturally had the deepest laydown, but put me in a zone I’d prefer not to be in because it was simply too deep on this shorter pattern. In a perfect world, I would be using urethane on this pattern. But if all I had was reactive, I would drill a Proton PhysiX with a shorter pin, keep it dull, and stay right for as long as I could. The other two balls were just too quick when they encountered friction. 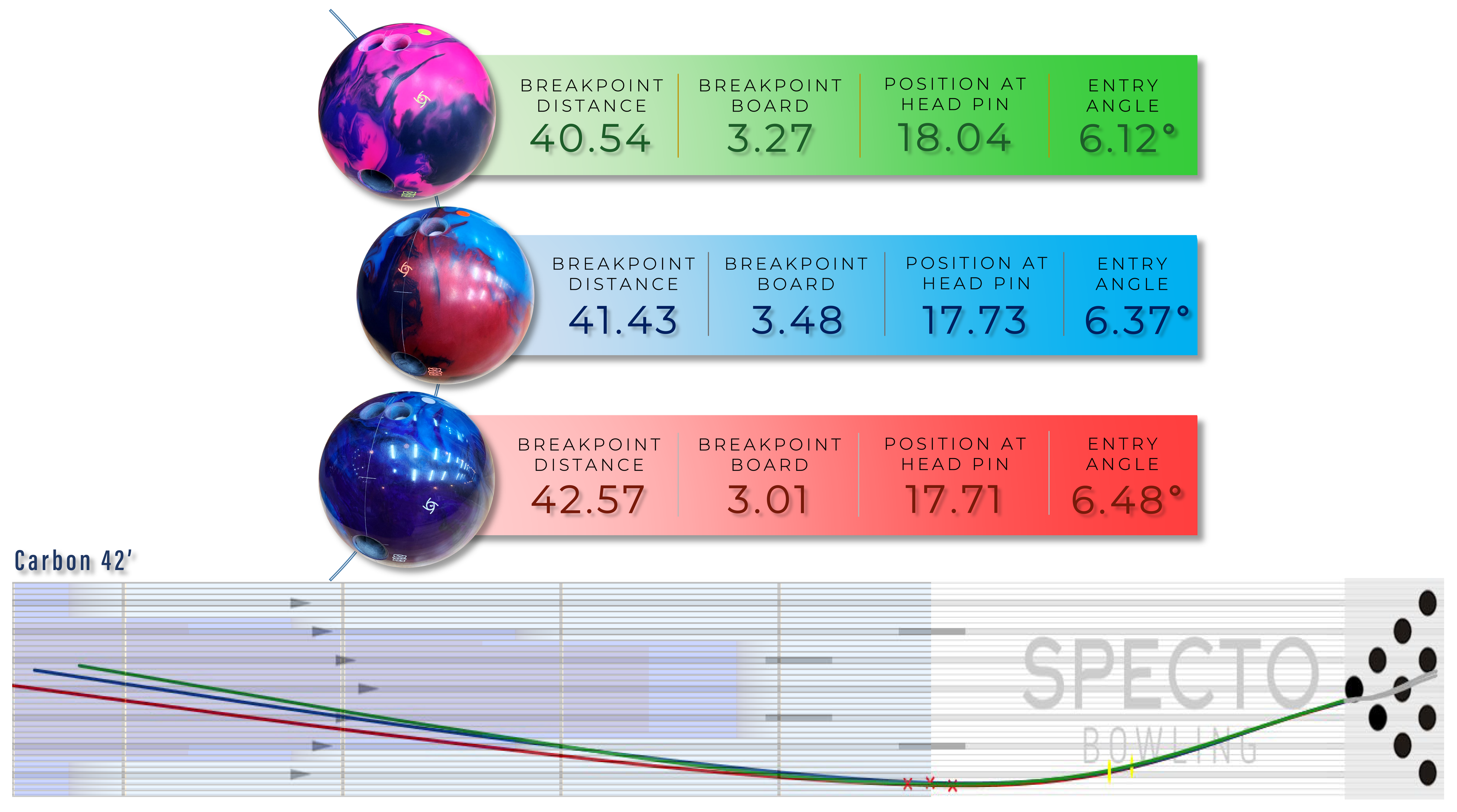 On a 42′ 10.36:1 pattern, you can take your pick of what you want to roll. This type of pattern lends itself to many styles, balls, and angles of attack. With this much oil in the middle and friction to the outside, there’s a clearly defined breakpoint here and it’s going to be outside of 5. The Proton wasn’t a bad look, but it started me too deep than I’d prefer. For my style on this pattern, smoother surfaces usually prevail. I appreciated the entry angle the AstroPhysiX was able to provide and I know that as the lanes transition I can stay in this ball the longest while still maintaining great finish down lane. 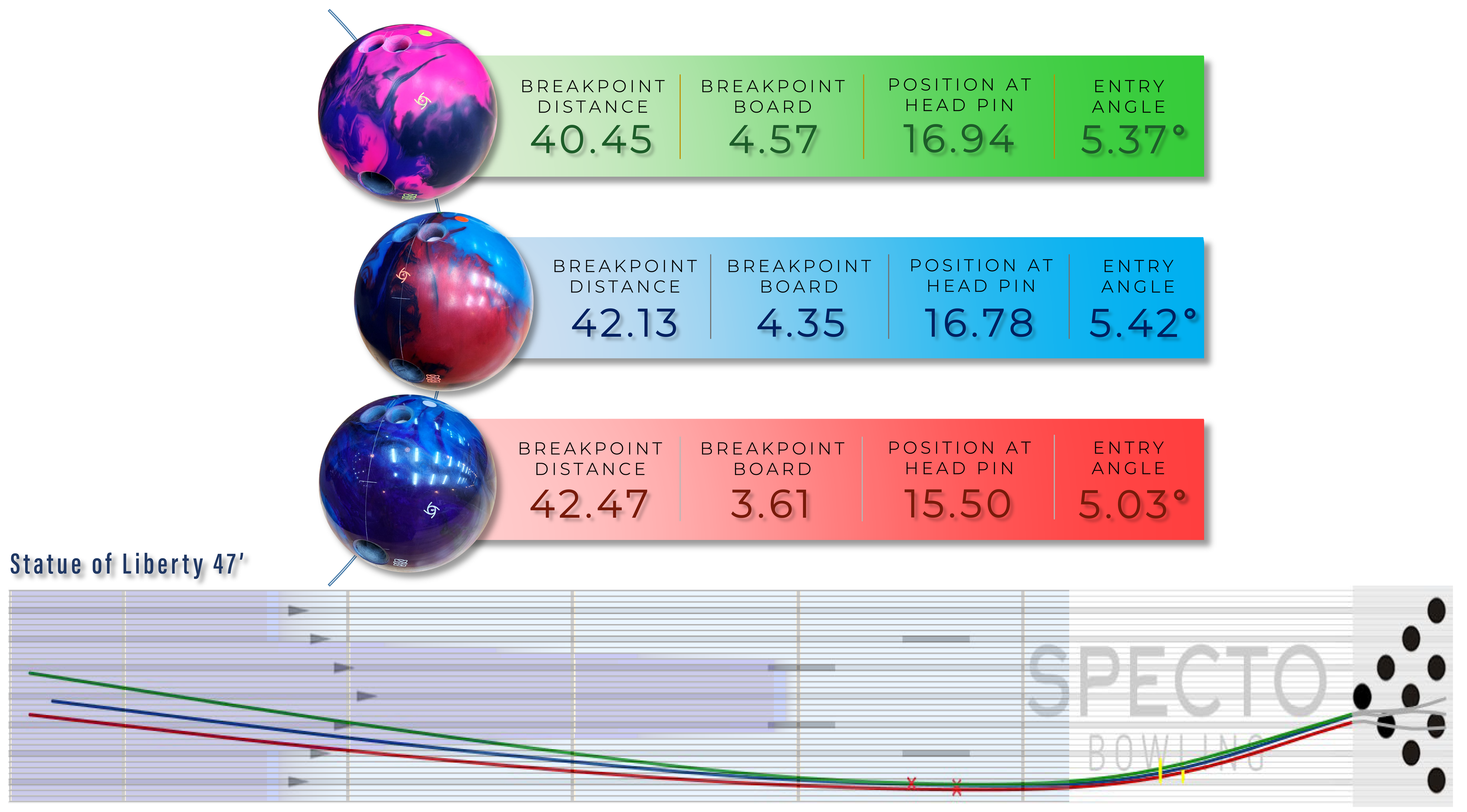 On the 47′ 3.05:1 Statue of Liberty surface will be key. The two balls I would bring to tackle this pattern would surely be the PhysiX and Proton PhysiX. This type of condition is exactly what these balls were built for. As you can see from the graph above the AstroPhysiX struggled to go through the pins the proper way and probably wouldn’t become an option for this pattern until very late in the day. I really had to focus on speed control just to be sure to hit the pocket with the AstroPhysiX. However, one of the niceties in the PhysiX lineup is that it’s never been easier to adjust between balls. Stepping up to the PhysiX or Proton PhysiX was the obvious choice for this longer pattern.

The most notable design feature of all three balls is their finish down lane en route back to the pocket. The Atomic Core left me in that confident state of mind where the ball is going to flare when and where I need it to. Because the PhysiX and AstroPhysiX have already been established, it’s important to note the Proton PhysiX has a specific target market of bowlers who are either beginners looking for extra help in hooking the ball, leaguers who need to blend out wet/dry, or high-level tournament players who need the teeth and flare to cut through the heavy conditions they regularly face. You can swing for the fences with this one – there’s no concern of it not making the turn back.

The colors provide instant feedback on just how quickly the Proton loses axis rotation, slows down, and gets rolling forward. This can come in especially handy because of just how strong the ball is and becomes a good indicator when it’s proper time to shell or even ball down. There’s always a bit of a trade-off with midlane read and entry angle when it comes to a ball like this, and you definitely don’t get the same sharp turn as you would on an AstroPhysiX. Understanding the design intent of each ball should make the adjustments between the two that much easier.

The Proton PhysiX was intended to make life easier for bowlers who need to dig in and create some significant motion front to back. The bottom line from this review – that is absolutely true. You can be confident that no matter which “PhysiX” you choose, it’ll have all of Storm’s best research and development technologies packed into it.